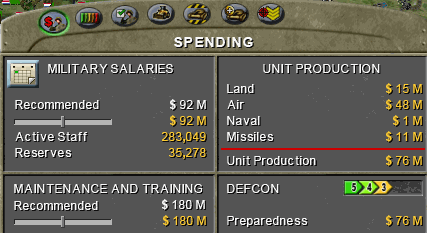 In Supreme Ruler 2020, a country's military reserves (reserve personal) is used to man military units and facilities. The reserve is slowly building up over time, and can be important in times of war.

Note. The military reserves can be viewed by clicking on your defense minister.

The rate at which a country is able to re-build it's reserve depend mostly on the size of a country's population. It will generally take a longer time for smaller contries, to build a great army, and losses are harder to deal with due to the slow recruitment rate, but this increase is typically so small, that it will not make a noticeable difference. But when used in combination with other adjustments, such as increasing the salaries of military personal, it may have a some effect.

Maxing out garrisons on key-position cities and facilities, can actually create a near unbeatable defense. If you invest in a pack of 10+ good bomber airplanes, those will often be able to defeat nearly all purely land based attacks.

There are no ways to increase your reserves fast, other than deactivating military buildings and reducing garrisons. The personal used to man these buildings is returned directly back into the reserve pool, and can either be deployed by units, or used to activate buildings where they are needed.

You may be able to increase your recruitment rate slowly over time, this is done by increasing your population through increasing spending in social policies that favor immigration (people entering your country), and discourages emigration (people leaving your country). This increase in spending can be employed along with increased military salaries. But it is worth to note, that small countries will likely not notice much of a difference, even after a few years of game-time, so it might be better to work-around the recruitment rate instead of trying to increase it.