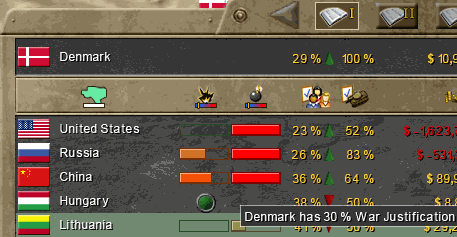 Typically if you declare war towards another country, many near-by countries will subsequently respond by declaring war on you, and sometimes start sending troops in your direction. Often not a very desirable outcome unless you have the military strength to crush such an uprising.

In general, the greater war justification your country has to go to war, the less negative consequences is suffered by a war declaration.

Researching technologies that are opposed by the world will typically cause other nations to dissilke you more, but this is a very slow process. A faster way would be to build more military fabrication facilities, such as land and air fabrications. This tend to make your neighbors angry with you.

It is also possible to use spies to anger other countries, this is done by assigning them to tasks and allowing them to get repeatedly caught.

If you declare war on someone, it will typically effect the casus belli with that nations allies, but it will also hurt your UN approval. Keep in mind that your UN approval ratings are an indication of how big a bonus you can get on your international deals. Declaring war on a nation without enough war justification, may lead to loosing your UN membership, and with it, the UN subsidy bonus on diplomatic deals, as well as the ability to borrow money.

When you wish to make your first expansion, the closest or smallest countries are often not the best ones to attack. It goes against common sense for a small country to attack a big country like Russia, nevertheless, in Supreme Ruler 2020 this can be a highly effective and fast way to conquer the world.

Some very large countries are actually very easy to attack, since they are defenseless in some areas. This holds true for Russia, where huge parts have very low supply. Russia will still try to send units to these areas, but they will typically run out of fuel before reaching you. Building supply depots and roads can help you overcome these supply problems on your side, but Russia will still be stuck.

Having a pack of bomber air-planes can easily deal with any land units that are sent by neighbors who have been angered by your actions. If you do decide to attack Russia from the top/behind you can also use these bombers to wipe out most the Russian army in these large low-supply areas.

Keeping your home-terretory well defended is a must. Often it will be enough to build a few fortifications and Air defense sites. However, having a back of bombers can really fight off most land attacks. It might not work for all countries, but it works for Denmark, where land based attacks usually moves through Germany.