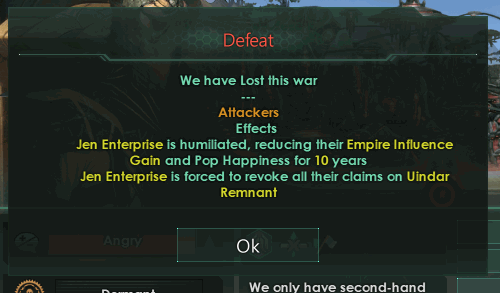 If Stellaris developer, Paradox, intends to frustrate the players of their game, rather than developing an entertaining game to play, then they succeeded.

Stellaris is filled with tiny annoyances that you have to be aware of so that you can either be prepared or avoid them entirely. One of these annoyances, and a highly illogical one at that, is the implementation of so called Fallen Empires; I have not dealt with them before, but when I recently encountered one, that declared war for no reason, I learned you can not beat them, so you best avoid them entirely. At least in early game.

Not only will you loose, and be forced to surrender, your leader, whom you may have grown attached to, will be removed from the game. They call it "assassination", but in reality it is just a removal, because there is just no way a fallen empire should be able to instantaneously teleport to your main colony and "assassinate" your leader.

This is a perfect example of a "bloat" feature that serves no purpose but to ruin the gameplay. Thanks Paradox. It feels like you just wanted to fill the game with content, and somehow this pathetic little "happening" made it into the game. Sometimes I think you are trying, on purpose, to make the game worse than it has to be.

Besides that, why is it that Fallen Empires, that are greatly overpowered, somehow decides to declare war out of the blue without warning? It looks like a static kill-trap with no real purpose, other than to degrade the gameplay of new players.

Fallen Empires can be turned off

Nice reminder to turn off fallen empires entirely when you start a new game. It makes no sense to have these ticking bombs occupy valuable space in a galaxy that already feels crowded, plus, who needs the added risk of being attacked by someone with hundreds of thousands in fleet power.

An end-game challenge perhaps? Who knows. There does not seem to be much indication in-game, about how dangerously overpowered they are, and what is needed to defeat them; so of course new players will be frustrated.

Personally, I am having a hard time deciding if I should turn them off. Turning them off makes it somehow feel like I am missing out on something, and including too many might effect gameplay negatively. It might be nice with one or two fallen empires, so I set the slider to 1 - 3 for future games. It reminds me a bit of the Antarans in Master of Orion.

By the way. I decided to quite the particular game where this happened and start over, which is very unfortunate, because it was not a bad game otherwise. It was just a mindblowingly annoying thing to happen.